According to accepted international jurisprudence, after a monarchy is dethroned, the Royal Family (and its descendants) may keep the titles lawfully indefinitely, always respecting laws of succession of that dynasty. That happened with several deposed families that kept their titles like: the Orleans, Bourbons and Bonaparts in France, the Savoys in Italy, the Bragancas in Portugal, etc.

That happened with Prince Gharios' family. He's the 8th great grandson in male line of HIRH Sheikh Youssef Chemor the last Ghassanid sovereign prince to rule until 1.747 CE in Zgharta-Zawiya (currently Lebanon). The El Chemor Sheikhs ascended to power in 1211 CE as the "Royal heirs of the last king of Ghassan" (the family's name "El Chemor" comes from king "Chemor" Jabalah") and never stopped using their titles until the present date. The Muslim branch of the family ruked until 1921 CE the pricnipality of Jabal Shamar or Ha'il (present-day Saudi Arabia) The El Chemor/Gharios/Guerios family in exile in Brazil couldn’t publicly and legally use the titles since according to the Brazilian Constitution of February 24, 1891, (amended September 3rd 1926 and in with this specific clause force until 1988) SECTION II, Art. 72, Paragraph 2: “Everyone is equal before the law. The Republic does not admit birth privileges, it does not allow forums of nobility and extinguishes the existing honorific orders and all its prerogatives and benefits, as well as the nobility titles and of council.” http://www.planalto.gov.br/ccivil_03/Constituicao/Constituicao91.htm The very same has happened with the Habsburg family in Austria since the country does not accept the use of noble titles since 1919 until today.

Below, the 1948's book "Al-Sheikh Al-Chemor Al-Hakam Al-Akoura (1211-1633) Al-Hakam Zawie (1641-1747)" in English "The Sheikhs Chemor rulers of Akoura (1211-1633 CE) and rulers of Zawie (1641-1747 CE)" Beirut, Lebanon, 1948, by the famous Lebanese historian Ignatious Tannos Khoury, where several scientific and academic evidence, corroborated by several other scholars, link beyond a single solitary doubt, the Al-Chemor Sheikhs as direct descendants to the Ghassanid King Abu Chemor Jablah (reigned 518-528 CE) and the Gharios Family as a direct continuation of the Al-Chemor Family. To read the partial translation of the book, please CLICK HERE     TO ACCESS HISTORICAL FAMILY DOCUMENTS PLEASE, CLICK HERE 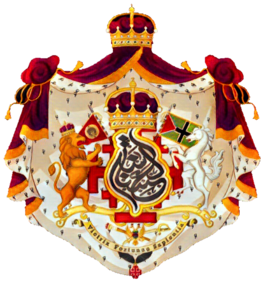 VERY IMPORTANT: The Middle Eastern Laws of succession are based on "agnatic rotation" differently than the "primogeniture" system of European monarchies where the eldest son/daughter invariably succeeds. To understand more, please read these articles about the legitimacy of the Royal family:

(Below) HIRH Prince Gharios with his cousin the late HRH Princess Lodi Chehab Al-Chemor at the Al-Chemor Palace in Kfar Hata, Lebanon. She's a Princess and a Shariffa by her own right descending from HRH Prince Bashir Chehab II "the Great", the Emir (or Prince) of Mount Lebanon from 1788 till 1840. She also descends from the Quraysh being related to the Hashemite Royal Family of Jordan and the Alouite Royal Family of Morrocco. Therefore, Al-Chemor Family (Prince Gharios') is related by marriage to some of the more important Arab Royal Families

(Click to enlarge)
1950's newspaper excerpt with an official statement by the Sheikh El Chemor of Zawyie about parliamentary election. Even though some family members had to escape and go to the exile, the family never ceased to publicly use their titles.

The Ghassanid titles are “Malik”, the Arabic equivalent of “King”, “Amir” the Arabic equivalent of “Prince” and “Sheikh”. In the specific case of the El Chemor family - the lawful heir of the Ghassanid Royal titles - the title "Sheikh" it’s related to a sovereign ruler (Al-Akoura and Zghartha-Zawyie from the 13th until the 18th century) hence, it’s also the equivalent of “Prince”. See the examples of Dubai, Abu Dhabi, Bahrain, Qatar, Kuwait, etc. where all the princes belonging to the ruling family are “sheikhs”. Understand more about the El Chemor Sheikhs titles HERE

“Besides the sovereigns referred to above, there are several oriental potentates who should be mentioned, the rulers of the Sultanates and Sheikdoms of East Africa and the Persian Gulf (…) The style of these sheikhs is His Highness.” From the book “Titles: How the king became His Majesty”, L.G. Pine, New York,  1992 (Barnes & Noble) p. 137-138

There are other kind of lesser “sheikhs” even in Lebanon. Those were either elevated by ruling princes or were mere tax collectors of the Ottoman empire. The aforementioned don’t apply to the El Chemor princes since it’s documented that they were ruling independently since 1211, almost 80 years before the Ottoman empire was even founded and over 300 years before the first emirate was created with prince Fakhr al-Din I (1516–1544) .

The titles of the El Chemor family were recognized by the Ottoman empire until its demise (1924 CE) and also by the Lebanese republic until the present date. The family's history was kept and validated for centuries by the Maronite Church under the Holy See (Vatican) and the authority of the Pope.

Please CLICK HERE  for an official 2014's article (in Arabic) from the Lebanese Government New's Agency (Lebanese Republic - Ministry of Information) recognizing the titles and validating the book (Historical Scientific Research) written in 1948 about the family's history.

Prince Gharios' rights and titles were also recognized by the by the International Arbitration Award number 0413/2011 that, according to the Brazilian Federal Law number 9307/96 has the very same legal value as a Federal Court Verdict and according to the the "1958 NY Convention on Arbitration" is a legal binding court decision in 142 nations in the world. Even being already "res judicata" (matter already judged not subject to appeal) by Brazilian Law, the International Award was recognized and enforced by the Los Angeles Superior Court in February 2012. (Los Angeles Superior Court Case Number BS-135337 of 02/24/2012). Also in 2012, received the highest honor of the State of Kentucky, the title of honorary Colonel.

In 2013, Brazilian jurists (one Chief judge and two presiding judges) signed affidavits recognizing the legality of the international arbitration award and Prince Gharios' rights and titles.

His Highness wrote the treatise "DYNASTIC AND NOBILITY LAW - THE END OF A MYTH" about the international jurisprudence on titles and honors and also about the legality of his claims for the Kingdom of Ghassan. To this date, the only specific book about the subject available in English.

In December 18th 2012, received an Award from the Brazilian Government in recognition of his philanthropic and cultural activities around the world as Prince and the Head of the Sovereign Imperial and Royal House of Ghassan. The award was proposed by the Congressman Ney Leprevost, voted and approved by unanimity by the State Congress.

In June 2013, the Sovereign Imperial and Royal House of Ghassan was approved as participant of the United Nations Global Compact.

In 2014, received United States Special Congressional Recognition and also a Certificate of Recognition from the Senate of California. Also in 2014 was invested as a Knight of the Holy Sepulcher of Jerusalem, a knight of the Pope, by His Beatitude Msgr. Fouad Twal, the Patriarch of Jerusalem and Grand prior of the Order, the oldest and one of the most respected and recognized Orders of Chivalry in the world. In 2015, was recognized by the Royal family of Dubai through His Highness Sheikh Juma Bin Al-Maktoum.

The Royal House of Ghassan was accredited by the United Nations with the Special Consultative Status in 2016. LEARN MORE

Was recognized and awarded by many political and religious leaders both in the West and in the Middle East.

- All titles recognized by the world's largest body of Muslim leaders LEARN MORE
- Recognized by the majority of religious leaders in the Middle East, both Christian and Muslim.

(Above) The Sheikhs El Chemor's palace in Kfar Hata in current Lebanon. The last Ghassanid Royal palace. Photos from the early XX century and 2015

For more information on the subject, please, watch the video below and visit the  Official website of the Sovereign Imperial & Royal House of Ghassan.

​In order to understand the Family  Tree, please, click HERE 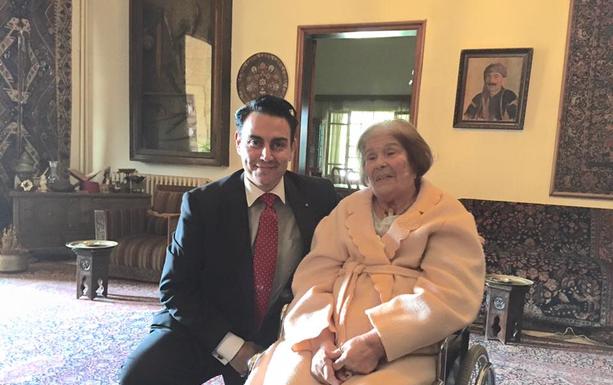 Photo right (click to enlarge) The grave of His Highness Sheikh Selim El Chemor (passed away 1909 CE, the great grandfather of HRH Prince Sheikh Selim El Chemor, honorary head of the Royal House of Ghassan), note that the royal title of Sheikh (in Arabic, upper right side) is on his tombstone, a capital proof that the family has been publicly using the ‘sui iuris’ titles for centuries until the present date. (Grave at the cemetery at the Mar Mama Ancient Church in Kferhata, Lebanon) Understand the legality of the titles here: